Abstract: The present study searched for morphological markers in the wings ofAnartia amathea roeselia butterfly. This species can be used as a model species due to its natural abundance in SE Brazil and Neotropics. It is an excellent tool for analysis of phenotypical traits and in studies of population genetics. In this research, wing pattern of both sexes were described and quantified in a sample of 812 butterflies considering sexual dimorphism related to size and colour. The results revealed that approximately 55% of the marker spots on the dorsal surface of wings presented little (< 2.5%) or no variation. Therefore, only ten of 22 spots were used as markers in the analysis, with some spots being sexually dimorphic. The female size was bigger than males as well as other Nymphalidae species. The results showed that the colour wing pattern of A. a. roeselia had enough differences to separate individuals of both sexes and morphological markers that can be used to study the role of natural selection upon populations of this species. 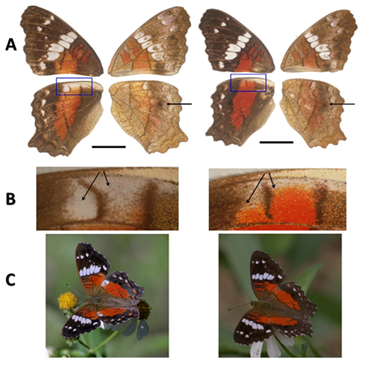